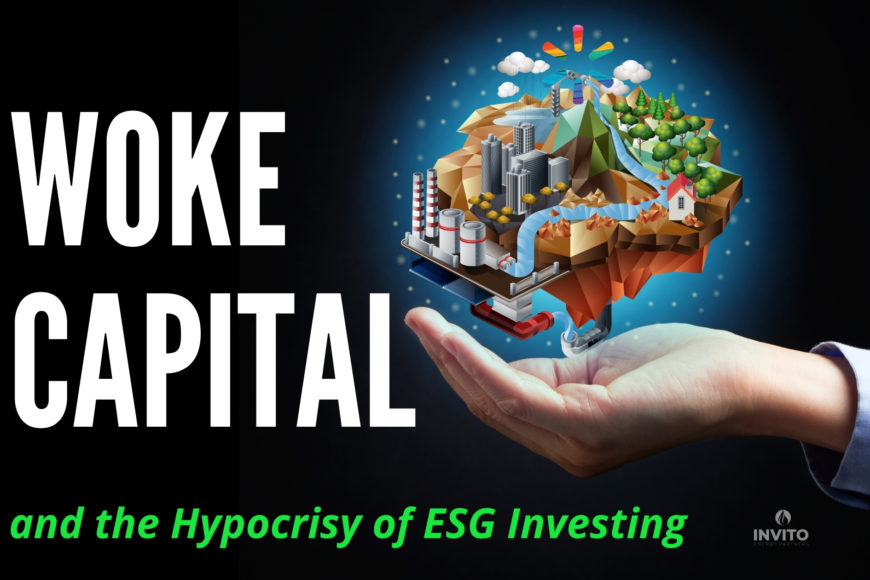 Woke Capital and the Hypocrisy of ESG Investing

As major investment firms promote their virtuous investments that maximize societal value, while seemingly scrapping their goal of maximizing shareholder value…one must ask:  Is woke capital truly committed and capable of delivering on its heroic quest, or is it simply pandering to social progressivism for profits and PR?

We live in a day where the undercurrent of mistrust towards institutions is at an all-time high.  Whether it is Wall Street, the Government, or Hollywood…everyone has an agenda, and pointing fingers seem to be the solution for a problem as vague as the umbrella of solutions offered.  Elevated as the root cause that threatens all of humanity’s prosperity…man created climate change…and the fuel propelling us off this cliff of human apocalypse…fossil fuels?!?

It is hard to argue, since the dawn of humanity, that no other energy source has plucked humanity from abject poverty to the precipice of human flourishing, development, and into enlightenment as fossils fuels have.  It has afforded our society the luxury to focus on values that are non-survival related and have enabled more progressive focus on values of equality, social justice, and environmental stewardship.  But tell that to almost half of the world that lacks such luxuries and would kill to enjoy a fraction of America’s energy abundance, and the 1st world values that come with them.

Rising energy consumption is tightly correlated with rising income and living standards, historically lifting humanity into the modern world.  Access to cheaper forms of energy is the necessary steppingstone for proper human development, and not a process that should be skipped with more modern expensive options.

Humanity has flourished over the past two centuries with the average life expectancy increasing from 30 to 70 years, due to the use of machines (technology) coupled with the harnessing of energy (mainly fossil fuels) with these technologies.  But linking historical human development with environmental risk requires a more targeted approach.  Humans suffer from far more immediate local environmental risks, such as indoor air pollution, water pollution and water-borne illnesses, and malnourishment than more long term global environmental risks, such as climate change, ozone depletion, and ocean acidification.

Over the decades, investment into business, specifically energy and energy technologies, has been a worthy, sustainable, and profitable endeavor whose local impacts can be certainly verified.  In particular, the vision, commitment, innovation, and sacrifice of the fossil fuel industry and the millions of talented employees, has been the irreplaceable and beneficial engine of progress for America.  Doing far more good than harm.  Thus, it is unjust to poorly treat and vilify an industry of people that do not deserve such ire.  Just imagine where the world would be without fossil fuels! 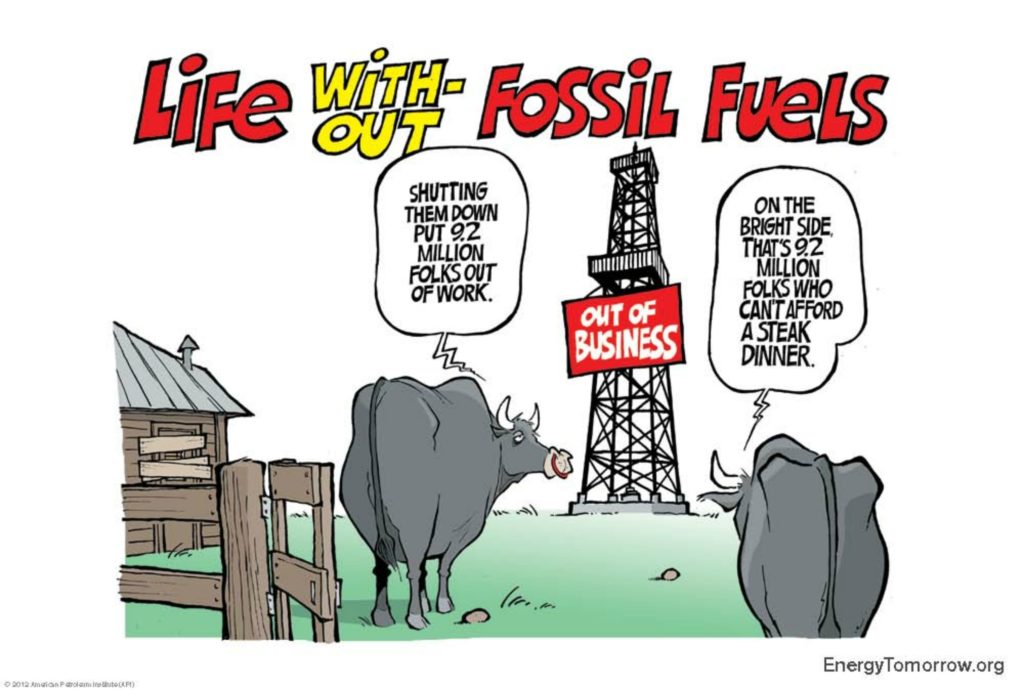 Two possible agendas can explain this demonization and woke capital mindset.   First, to deflect the public’s perception of Wall Street greed (power and control) and poor performance, it is much easier to use a popular cover narrative (climate change) and perpetrator (fossil fuels) than to accept responsibility.  And why not, when doing so additionally elevates your status and virtuousness.  Second, distracting an investor from reality is profitable…and words like “sustainability” and “ESG” and phrases like “saving the planet” are powerful images and again…profitable.

Recently the behemoth investment firm, BlackRock, which manages $7 trillion in assets, committed to a multitude of ESG initiatives including substantially increasing its so-called ESG funds, pushing clients to adhere to the UN’s Sustainable Development Goals, and aligning itself with “Climate Action 100+” aimed at improving business strategy with the goals of the Paris Agreement. ESG investing today is estimated at over $20 trillion in AUM or ¼ of all professionally managed assets globally.

If BlackRock and its sustainability-allies are true virtuous climate believers, why then has it been expanding its firms’ holdings in serial polluting Chinese investments?  As a result, millions of untold investors, through asset managers and their ESG vehicles are helping fund and strengthen the Chinese Communist Party (CCP), and their atrocious record of human rights violations and increasing polluting policies.  Shifting this “new standard for investing” reeks of hypocrisy, misleading shareholder stewardship, and disingenuous profiteering.

Trends show energy consumption will continue to rise globally in the 21st century.  Modern economies are becoming less materially intensive and more service and knowledge focused, while economy growth rates exceed slower environmental impact rates.  In part, fueled by the cyclical effect of affordable fuels and technologies that enable reducing environmental impact in the first place.  This decoupling effect of human development from the environmental impacts is predicated on more efficient human activity driven by energy, technology, and demographic trends, like urbanization of the planet…not unproven investment theory based on poor scientific, economic, and societal history.

How can the woke sophisticates in the financial services world and beyond who knowingly underwrite China, and other implied nefarious companies, claim to be genuine progressive ESG loyalists, let alone proponents of justice of any kind?

The history of harnessing energy through technologies is an intertwined dance between the patient process of human activity, fueled by economic investment, but relative to the increasing ability to use natural resources more efficiently.  Americans should know this better than anyone.  The history of harnessing natural resources in this way has afforded America these current modern energy opportunities.  Again, one cannot simply skip steps on its way to maximizing human activity.  Diversifying investment products should favor those with the most eco/cost efficient solutions, relative to the specific stage in that localized process.  Understanding that applying a general global policy to local ecosystems, does not protect the very natural resources they aim to address.  Ordering targeted solutions for energy sources should favor the benefits to human development first, then focus on efficiency of those waste streams and use of natural resources.

But to suggest that the idea of sustainability investments is the only conceivable path forward, is to infer that historical ones were not.  Not true.  Moreover, little evidence exists that human population and economic expansion will outpace the capacity to grow food or procure critical material resources in the foreseeable future.  And ironically, all modern so called renewable energy is truly neither renewable nor sustainable.  All require exploiting natural resources and underlying technologies.

This sleight of hand woke capital is trying to pull off is fundamentally nothing more than an attempt to profit and take control of an energy transition.  But victoriously parading around their own virtue and value is good marketing…even though it may be hard to swallow.  Modern so-called sustainable options are simply not affordable…yet…nor remotely as efficient and helpful as advertised.

For this purpose, let us not pretend that demonizing an undeserved industry, while wrapping itself in the virtuous robe of climate change, is in of itself noble or accomplishes something that it has not done in the first place.  In the last few decades, humanity has seen exponential progress towards once unfathomable human development.  As a proponent of the oil and gas industry, supporting a diversified, efficient, and agnostic energy policy is the most complete historical and economic investment strategy.  Insofar as it uses natural resources efficiently, reduces poverty and increases modern living standards, and progressively balances capital/energy/labor economically, the virtue of investment and economic stewardship should be judged on what it has done and what it continues to do.  Throwing the baby out with the bath water solely on the perceived merits of perception or progressivism is neither responsible nor woke.  Efficient reduction of monetary and environmental waste has and will continue to propel humanity towards the summit of prosperity.  Only then can the luxury of progressive societal values truly permeate humanity as a whole and transform our planet, our ability to steward, and ourselves.